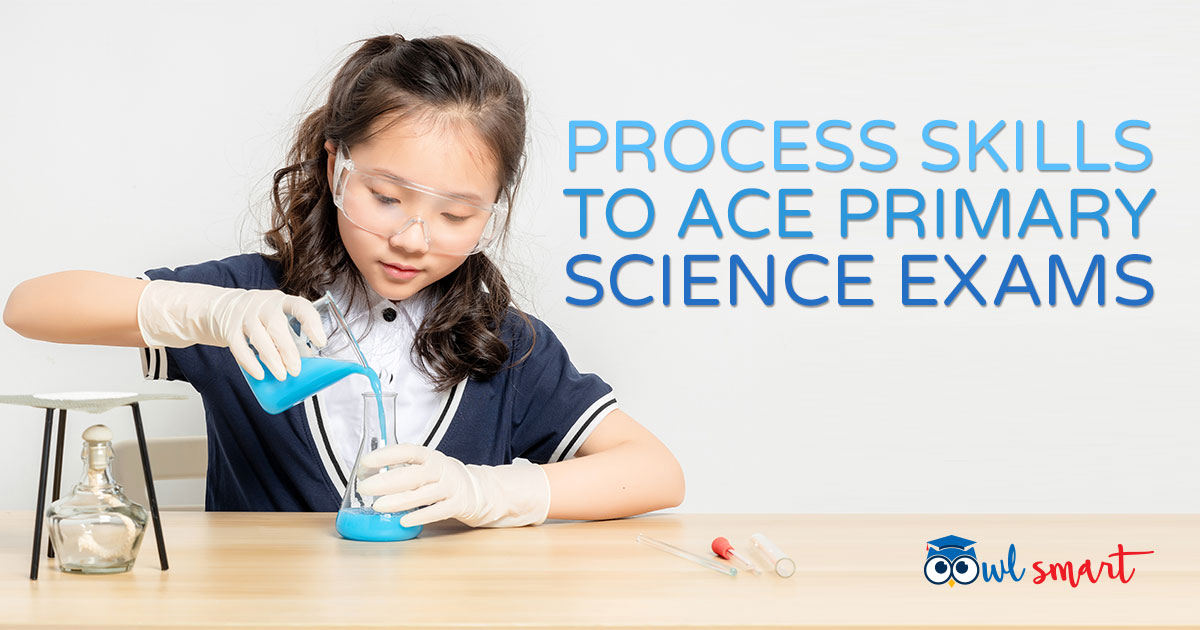 It is not an easy task to achieve success for PSLE Science or school-based exam.

In my opinion, it is tougher to obtain an “A*” for PSLE Science than for PSLE Math.

Other than mastering answering techniques, having understanding and ability to apply concepts in different scenarios given, it is also very important that a student learns the process skills needed in tackling different Science questions.

You might want to read the following article to find out more on how you can prepare your child for a Science exam.

The list below shows some common process skills needed in tackling a typical Science question.

In this article, I am going to share with you what some of these process skills are and their examples.

Predicting is the skill of assessing the likelihood of an outcome based on prior knowledge of how things usually turn out.

Ali conducted an experiment to find out more about life processes that take place in plants.

After a few hours, he observed the dishes of limewater from each set-up.

Given that limewater is originally colourless, which of the following shows the most likely observations made on the dish of limewater in each set-up?

Since the bell jar in Set-up A was coated with black paint, the plant in it could not photosynthesise and would only give out carbon dioxide. Thus, there would definitely be more carbon dioxide in set-up A than in Set-up B.

Using prior knowledge that plants need light to photosynthesise and take in carbon dioxide, we can predict that the limewater in Set-up A would be more cloudy than that in Set-up B.

Inferring is the skill of Interpreting or explaining observations or pieces of data or information. A student needs to construct a link between an indirect information given and a concept learnt.

The diagram below shows two toy cars, each with a bar magnet fixed to its top. When the two toy cars are placed close together, they move away from each other.

Which one of the following statements best explains why this happened?

Analysing is the skill of identifying the parts of objects, information or processes, and the patterns and relationships between these parts. Questions that need analysing skill can involve different variables that affect the investigation or in carrying out a fair test.

Adam set up an experiment as shown below.

He added identical weights one after another onto the spring. He wanted to find out if the number of weights used would affect the extension of the spring.

Which one of the following graphs shows the correct relationship between the extension of the spring and the number of weights added to it.

In this question, we need to identify the relationship or pattern in data between the number of weights added to the spring and the overall length of the spring.

As the number of weights added to the spring increased, the total length of the spring will also increase till it cannot be extended anymore.

Sam carried out an experiment as shown below.

When he released the metal ball, the box moved to Position T. He wanted the box to stop at Position S instead of T. The following were some ways he thought of:

Which of the above ways should he use to help him get the box to Position S?

In this question, a student needs to assess the feasibility of the different ways to achieve the aim based on concepts he/she has learnt in Forces and Energy.

Point A is not feasible. Lubricating the plank with oil will reduce friction and the ball will roll faster and have more kinetic energy (KE is dependent on speed) to move the box further.

Point D is not feasible too. Raising the height of the wooden box means the ball will be higher from the ground and have more GPE. More GPE will be converted to more KE to move the box further.

Note that your child might need more than one process skill to handle individual Science question as the questions tested nowadays can be tough with diagrams, different variables, data and graphs involved.

Other than having a basic understanding of concepts and knowing how to apply them in questions, your child should hone his/her process skills in “dissecting” or analysing a question too.